Soy milk, almond milk, rice milk, and other options are available if you are completely dairy-free or prefer other milk options in your coffee. Have you tried oat milk though? Do you know how does the flavor of oat milk compare?

Those of you who haven’t tried oat milk yet are unquestionably losing out. Amazingly, the flavor tastes like cow’s milk but is sweeter.

Although it doesn’t exactly taste like a bowl of cereal milk in the morning, drinking it really does make you beam! And for that reason, so many people like it!

Oat milk pairs well with many beverages due to its sweetness and oat-like aftertaste.

Any wonderful coffee recipe that asks for cow’s milk or even soy milk may be substituted with oat milk.

Although it has been present since the 1700s, it has just lately begun to appear in popular restaurants and grocery stores. I have consumed several cups of oat milk and have not grown tired of it.

Also check: Does Apple Crisp Need to be Refrigerated?

You must be wondering, can the texture of ordinary cow’s milk truly be replaced by oat milk? If you believe that oat milk lacks smoothness, give it another shot.

It differs from the common nut and almond milk. The fascinating thing about oat milk is that it can get a really creamy texture out of very little. Simply give it a go to see for yourself! It will be your favorite once you have tasted it, trust me!

Each serving of oat milk and almond milk has about the same number of calories and is equivalent in terms of nutrients.

There are a few slight variations between the two drinks, though. For instance, oat milk has more carbs and iron than almond milk, but almond milk has a little higher fat and calcium content.

Here is the nutritional content for 1 cup (240 mL) of unsweetened oat milk and almond milk shown in further detail below.

Remember that many products are fortified, meaning that some brands may include greater levels of specific minerals like calcium, vitamin B12, and vitamin D. 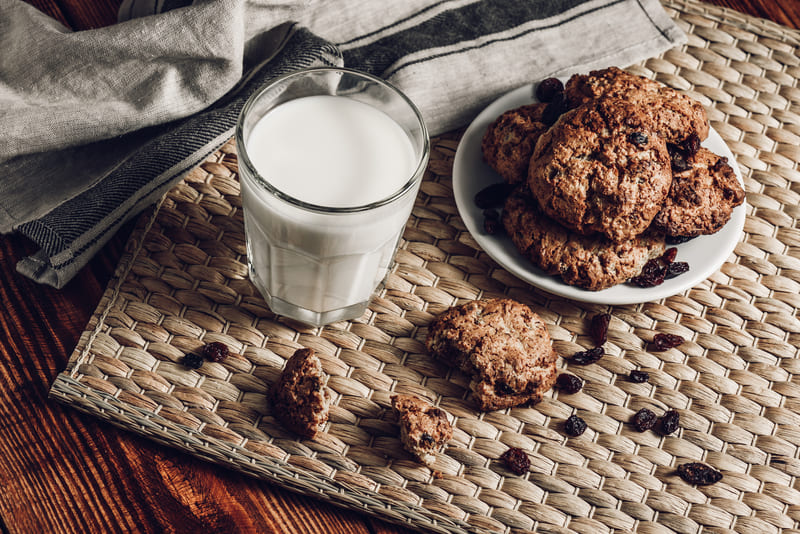 Is oat milk as good as regular milk?

The nutrient profile of oat milk and dairy milk is one of the greatest and most significant nutritional variances between the two.

Compared to dairy milk, oat milk has fewer nutrients, and the majority of those are fortified. That implies that they are introduced during production rather than developing spontaneously. Let’s break down the differences in the table below.

Today’s supermarkets provide a wide variety of oat milk brands, both on the shelves and in the dairy case where it is chilled.

You can get creamier, higher-fat varieties that are perfect for use as coffee creamers in flavors like chocolate, vanilla, and blueberry.

Because it is so creamy, oat milk is ideal for coffee. Unlike other milk substitutes for coffee or tea, it doesn’t overshadow the flavor, which is why I prefer it.

Oat milk and regular cow’s milk are very comparable in taste when it comes to coffee. Oat milk might help you when you want to lessen the bitterness and add some cream to your coffee.

If you enjoy making coffee art or foam, you might be wondering if oat milk works just as well. That’s a yes, of course.

Oat milk warms more quickly than cow’s milk, hence it is important to monitor the temperature during heating.

To get a better balance between your coffee and oat milk, many baristas advice letting the steamed oat milk sit for a while before using it.

You can taste a little earthiness when you heat the milk by yourself. However, the tea tastes sweeter and has traces of caramel when the heated oat milk is added to hot or iced tea.

Here is a more thorough discussion of the reasons why oat milk and tea are such a brilliant combination.

Natural sugars are found in oats. These are fantastic and typically healthier than the sweeteners added to milk.

The distinction is that the sugars are not too sweet because they are natural. Your children could sense the difference and conclude that oat milk has a different kind of sweetness.

Serving oat milk and oat cereal together is one approach for serving. Without consuming an entire bowl of oats, you will still detect a sweet, oaty flavor.

Additionally, keep an eye out for additional sugars in your oat milk. Oats naturally contain sugar and enough carbs, so you probably won’t need any additional sweeteners.

Furthermore, let’s talk about texture. The way the milk was processed will have a significant impact on the texture.

Oats must be thoroughly broken down to produce healthy milk; nevertheless, when poured from the carton, oat milk might appear to be quite thin. These have the least fat and are often the most easily broken down.

Otherwise, the texture of oat milk may be slightly, and by slightly, I mean very slightly, gritty. Since milk is just cow juice, it is frequently incredibly smooth. Also, a carton of oak requires a million pieces of broken oat.

In certain cases, oat milk is a little bit thicker than conventional skim milk. Oat milk occasionally has a tendency to seem thinner, in part due of its light brownish hue.

As a white beverage, milk is often opaque, meaning you can’t see through it. Even yet, oat milk has the potential to be creamier.

The creaminess is produced by the oats themselves. It should be noted that oat milk does not taste or feel the same as soy milk, almond milk, or other plant- or nut-based milk. They are frequently quite thin, which isn’t always a negative thing.

Why oat milk is so popular?

People can’t get enough of oat milk’s distinctive flavor, which is one of the reasons it has become so popular.

Numerous factors have contributed to oat milk’s success. First of all, oat milk tastes quite similar to cow’s milk, so those switching won’t really taste much of a difference.

Oat milk is a fantastic dairy substitute since more individuals are discovering their lactose intolerance along with the surge in veganism.

Although it is more expensive than cow’s milk, it doesn’t appear to detract from its attractiveness, and it is extremely nutritious to consume.

But there’s another explanation for the popularity of oat milk. Oat milk’s rising appeal is being attributed to the interest in plant-based diets, according to Keri Gans, author of The Small Change Diet and registered dietitian nutritionist in New York City, who spoke with Shape about the topic.

Oat milk is undoubtedly popular right now, but it doesn’t appear that this trend will fade very soon.

A carton of oat milk would have been difficult to get ten years ago, but today you can find it in any supermarket and coffee shop on the high street.

Can you drink oat milk straight?

Oat milk can, of course, be consumed in the same manner as cow’s milk or any other non-dairy option. But because of its frothy, creamy texture, it’s a particularly well-liked choice for smoothies and your preferred coffee shop beverage.

Many of the same health advantages of ordinary milk apply to oat milk as well. For instance, they both contain almost the same number of calories per cup.

Oat milk also contains significant amounts of calcium and vitamin D, much like cow’s milk. Therefore, having one or two glasses every day is a terrific strategy for both adults and children to develop strong bones.

But be warned that a lot of oat milk’s health advantages originate from additives employed by large-scale producers throughout the production process.

Oat milk won’t be nearly as nutritious if you attempt to prepare it by yourself.

The absence of cholesterol in oat milk gives it a benefit over ordinary milk. As a result, those with heart problems should consider it. Its nutritional advantages also make it a great option for people who consume no dairy or are vegan.

Additionally, you could get bloating and gas from drinking sufficient oat milk. Although not severe, the effects are more noticeable than with other plant-based milks.

Oat milk contains soluble beta-glucan, which is the cause. It’s one of the chemical substances that is known to cause bloating, gas, and stomach discomfort. Therefore, if you’re concerned, limit yourself to just one glass of oat milk.

For a somewhat different flavor than typical cow milk, oat milk is a great beverage. Depending on how you prefer your milk and what sort of dairy milk you drink, your opinion of the creaminess, texture, and flavor of the milk may differ.

Oat milk’s finest feature is that, like dairy milk, the taste and texture can vary from brand to brand. Try another if you don’t like the first one; you could discover one that works for your needs or color scheme.

Since it has a flavor that is similar to regular milk and can be used for many of the same recipes and purposes, oat milk will be especially beneficial to those who are lactose intolerant.

As well as that, oat milk is helpful for those who need a lot of carbohydrates. Carbohydrates are made from oats, which may provide runners and other athletes a ton of energy.