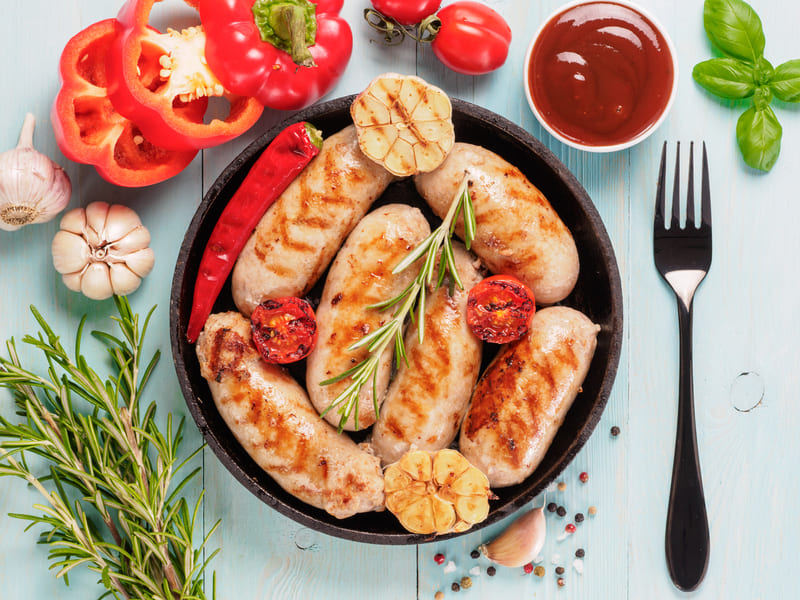 There are so many types of sausages in the world that are all enjoyed differently. To name a few, there are turkey sausages, bratwurst, Chorizo, Italian, and the one we will cover in this article, the chicken sausage.

Sausages have been enjoyed by people for a long time. To be exact, it’s been more 5,000 years, which is how long its been recorded so there’s a chance they have been around longer.

They made their way into record in Mesopotamia, which is now known as Kuwait, Iraq, and parts of Saudi Arabia. It became a nice snack or appetizer all around the world in its days.

Though the main question that everyone may be wondering is how long you cook a chicken sausage. The best way to cook chicken sausage is on the stovetop, which takes about 15 minutes altogether.

However, if you use a different method the cooking time will be different. This article will cover the different ways to cook chicken sausage!

Also check: How To Know When Chicken Is Done Boiling

How To Cook Chicken Sausages Step By Step Guide

If you want to make this into a meal kind of deal, you can by following the simple recipe that will be after this how-to!

If you are looking for a way to make these chicken sausages into a meal, then stay tuned for this pretty simple recipe I found to follow:

These are the following ingredients you will need:

Next, are the steps on how to make them:

How Do You Know When Chicken Sausage Is Cooked?

There are a few ways to determine when your chicken sausage is completely cooked. One of the easiest ways to find out is by using your meat thermometer and making sure it is at an internal temperature of 165 degrees.

You can also tell by touching them with your spatula. If they are firm when you gently press on them, they should be done. If they are still a little squishy (or a lot) then they still need to be cooked.

Also check: How Long Is Chicken Good After The Sell by Date?

There may be other wys that you can check, but the three i explained are the most popular ways. Make sure they are fully cooked and if you are in doubt, a couple more minutes won’t hurt anything. 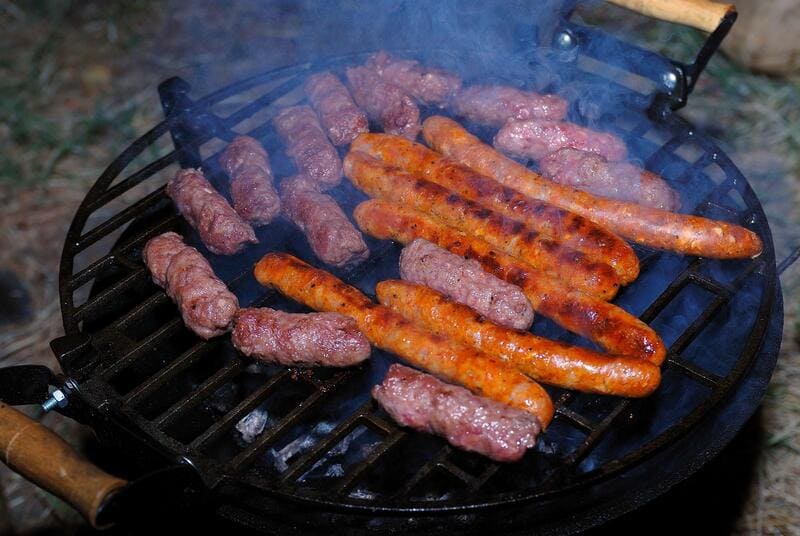 Are there chicken sausages that are already fully cooked? The answer is yes, there are. They are called pre cooked sausages, amd they don’t take as long to cook as a raw sausage does.

The pre cooked sausages are also a little easier to cook, considering you don’t have to worry too much about making sure they are ready to eat, because they are always ready to eat.

You can make these in any way that you make a raw chicken sausage, except it won’t take as long to cook.

Make sure you pay attention to them when you use the airfryer, oven, skillet, or whatever you choose to use. You can aslo still use veggies and other things to make it into a full meal if you wanted to.

How Long Do You Cook Raw Chicken Sausage On The Stove?

One of the most popular ways to cook sausages, including chicken sausage, is using a skillet on the stovetop. For this method of cooking, you need to make sure you are using the correct amount of time.

So, how long do you cook them for in a skillet? Some sources say that cooking them for about 6 minutes on each side should be good enough. Others say that about 15 minutes altogether will work as well.

The best thing to say for this is to cook them for about 6 minutes on each side, and if needed you can cook them for a little longer. Just remember to use a method of checking to make sure it’s cooked fully!

If you are using pre cooked sausages, then the timing wuld be shorter than a raw sausage, like i’ve implied multiple times because it is important to remember!

How Long Do You Cook Chicken Sausages On The Grill?

You can cook chicken sausage on the grill with a couple steps. The first step would be to turn your grill on and heat it up to a medium heat. You don’t want it too hot or it could cook them too much.

Another step to cooking on the grill would be to place your chicken sausage on the grill, making sure to get them as close to the most heated spot as possible, so they can get cooked thoroughly and there isn’t a chance that they are cooked unevenly.

Cook the sausages for 8 minutes flipping them over and then cooking the other side for another 8 minutes. Make sure they are cooked through well enough, and then you can add your desired spices and seasonings.

If you are planning on adding vegetables, you can cook them on the grill with the sausages, you absolutely can achieve this.

However you will want to keep the veggies cut in half or whole, out your seasonings on, and then when they are grilled, you can take them off and cut them however you want to. 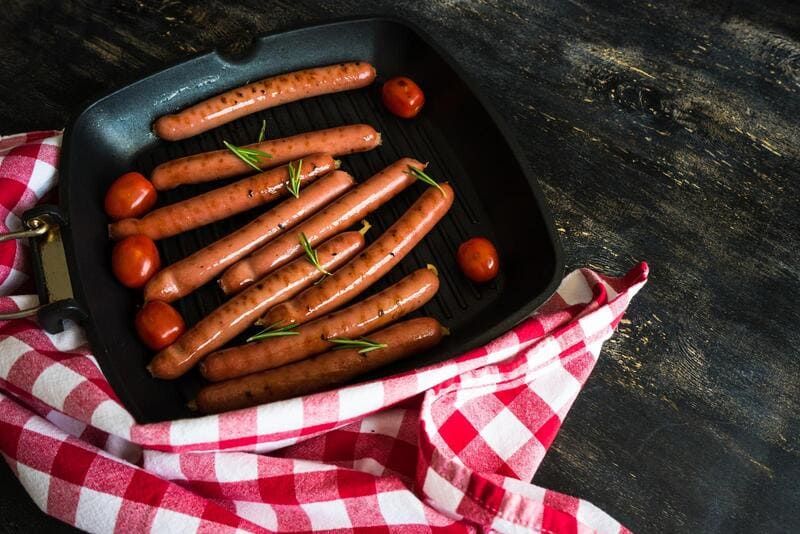 How Long To Cook Chicken Sausage At 400 Degrees In The Oven?

Cooking chicken sausage in the oven is a great way to make an easy dinner or even an easy snack! Cooking them in the oven can help keep them juicy as long as you bake them correctly.

There shouldn’t be too much of a mess though, which is an amazing thing everyone will enjoy.

You can cook raw and precooked chicken sausages in the oven. There are different temperatures to do so, and one of them is 400 degrees. What you want to do is to preheat your oven to 400 degrees.

Once its preheated and your chicken sausage is ready to go, you can pop it in the oven for around 20 minutes.

It may take a little longer, so after 20 minutes, you will want to use a checking method to see if they are fully cooked.

You will not want to cook it for too much longer than needed, or it can lose its juiciness and potentially become very dry.

This can and most likely will ruin the texture and maybe the taste of the sausage, and make it tough to cut and/or eat.

How Long Do You Cook Chicken Sausage In Oven at 350 Degrees?

Above we have covered cooking at 400 degrees, but what if we cook these sausages at 350 degrees instead? This will definitely add to the time of the cooking but it shouldn’t mess with the juiciness at all.

Cooking at 350 degrees is a little slower, but this makes it a little easier to not overcook your sausage by using a lower temperature and more time.

What you want to cook the sausages at is 25 minutes. This is just a tiny bit longer than cooking it at 400 degrees. Either way it will be a juicy and delicious snack or meal.

If you want veggies with it, skillet on the stovetop would work wonderfully while your delicious chicken sausages are baking in the oven.

How Long Do You Cook Chicken Sausage In The Air Fryer?

Cooking chicken sausage in the airfryer can be a quicker and crispier way. A lot of people have airfryers in their households and it can usually be the go to countertop appliance.

There are steps to doing this correctly so you don’t overcook or even burn your sausages. There is also a certain amount of time for them to be in the airfryer which they can take about 17 to 20 minutes.

The first step to doing this correctly would be to preheat your airfryer to 360 degrees and put the minuted to 17-20 minutes.

Then, you should place the sausage in a single layer in the airfryer basket. Don’t put them super close to each other.

You want to make sure there is a little space between them. If you are planning to cook alot of sausages, you will have to do them in batches so they can cook correctly.

After they are finished in the airfryer, remove them if they are at the internal temperature of 165 degrees. Repeat with the other sausages you have and then enjoy them.

You can add seasonings if you would like to when they are cooked. If you are cooking preccoked sausages, the time will be a little less.

This is a great way to get crispy, less juicy sausages, but they will still be juicy, but the juicier sausages would be made in the oven. So if juiciness is what you want, your best bet would be the oven!

Do You Cook Chicken Sausage In Its Casing?

This is a great question and the answer is yes, you can remove the casing of the sausage before you cook them.

It will help it cook a lot better and you won’t forget that it is on before you eat it. It is a plastic or natural type of casing that helps keep the sausage in its shape.

Cooking in the casing could help it be a little easier according to some. Although whether you want to cook it with or without will not make that big of a difference.

If you made homemade chicken sausage, you will have a casing on it that could be easier to remove, but if it’s store bought alot of the times it is pretty hard to remove it.

You can remove the casing by using a knife or something with a sharp edge and drag it on the casing then peel the casing away, but be careful to not shove too hard into the sausage or you may cut it in half as well.