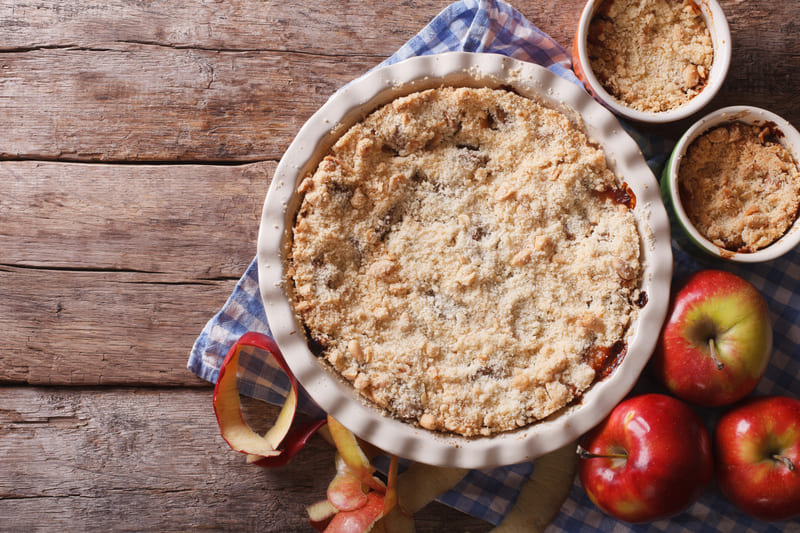 An apple a day keeps the doctor away, is what a wise man once said.

And he was absolutely right. The apple is an absolute queen of fruits. It is one of the first cultivated fruits. It is rich in vitamin C with health-beneficial ingredients.

The apple today is also an unavoidable ingredient in gastronomy. Be it for salty or sweet meals, the addition of an apple just does wonders.

For most, the first thought associated with an apple dessert, be it apple crisp, apple cobbler, just ordinary apple pie, or some other variation of it.

Among the thousands of recipes of apple crisps and versions of it, most of us have that special one that has been jealously kept in our kitchens, often transferred only from one generation to another. Each recipe has its own individual touch and special signature.

What is Apple Crisp?

The apple crisp is one of the original recipes. And one with the longest traditions. There are also occasions when you might need that perfect apple crisp of yours, like, “now or soon”.

And due to rush days and other obligations, you don’t have time to make it just when needed. The solution then is to prep it earlier. And if it is made in advance, the question remains: 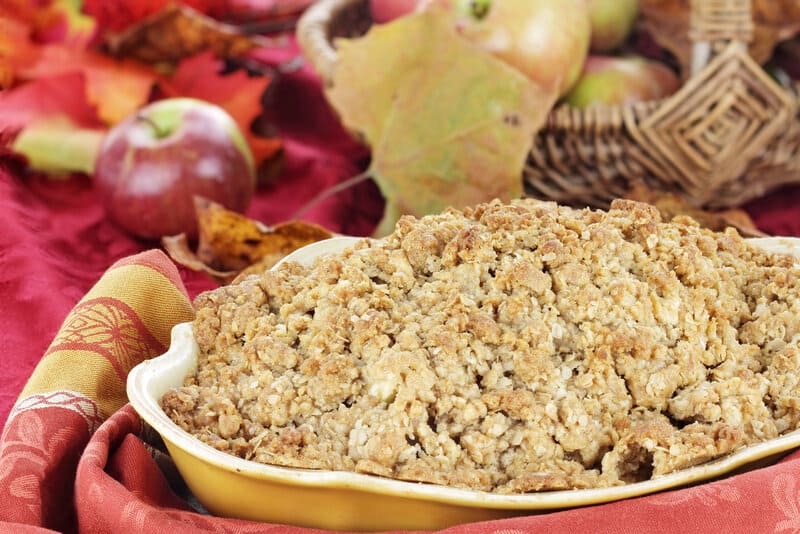 Does Apple Crisp Need to be Refrigerated?

Even though the crisp, when originally created, was intended to be eaten warm.

Meaning it was highly recommended not to refrigerate it. Using different preservations methods or leaving it to cool down at room temperature instead is a much better solution.

In cases when it’s necessary, following some basic storage advice, it can be refrigerated too.

Apple crisp is a modern variation of one of the oldest known traditional recipes. Prepared by our ancestors, it remains one of those recipes you will always happily return to once you try it.

It is a relatively modern dish, notable absent from cookbooks older than those from the start of the 20th century. And often it is compared to or referred to as a crumble.

The basic recipe of this dessert is made with some pastry, topping of a mixture of brown sugar, flour, butter, rolled oats, and chopped fresh apples.

Ingredients of this tasty dessert include butter, sugar, flour, cinnamon, and additionally often brown sugar, ginger, oats, and even nutmeg.

As it usually happens with any recipe, new ideas, innovative chefs, and easier way to access fruit from all over the world have resulted in many new variations of this dessert.

And nowadays you can find and taste it with peaches, berries, or pears. And many more other fruit or ingredient combinations.

Relating to the main question of this article, should an apple crisp be refrigerated? Not to confuse you too much, let’s include a simple yet understandable explanation.

Looking back to the origin of this fabulous, popular, and tasty dessert, now more than a century old and still counting, imposes a logical answer: NO. You should not unless it is really necessary.

It especially doesn’t need to be refrigerated if it has sugar. According to the US Department of Agriculture, any fruit pie made with sugar can be kept at room temperature for up to 2 days.

If you are making any of the crisp’s versions containing eggs, custard, or cream, or sticking to the original recipe but making it a few days ahead, then it does need to be refrigerated after a cooling down process of several hours.

At the time when the original recipe occurred, they didn’t have refrigerators as we have them today. And the dessert was prepped with the intention to be eaten right away after it has cooled down a bit after baking.

If it is just a day ahead you need your special dessert, the best thing to recommend is to leave it to cool down overnight.

How Long Before Apple Crisp Gets Spoiled?

Apple crisp will stay as good and fresh up to 2 days after it is made. If it needs to rest a few days longer, to keep it soft and fresh.

And mostly due to the fact that cooked oats and apples may become hazardous after sitting at room temperature for too long, you can of course refrigerate it. Just make sure it is well covered with plastic wrap.

The plastic wrap will help keep it fresh and tasty as if it was just baked. And additionally, it will prevent the smell absorption of other food you have stored in your fridge. Especially those with an intense smell.

Storing it next to fruit and vegetables will be just fine. However having your crisp smell like lamb wouldn’t be much fun, right?

Extra advice regarding the storage of the apple crisp is not to freeze it under any circumstances. Freezing would cause absorption of moisture, leading to falling into pieces, losing freshness and texture. And eventually, taste.

Having it all said and suggested, the best and the most convenient method is to simply leave your apple crisp sit overnight.

What is the difference between apple pie and apple crisp?

Some would say that they are actually two completely different desserts, and quite honestly, it is not far from the truth.

They are both tasty bites of the fall, having in common some sort of pastry and fresh apples. But both the preparations and ingredients vary.

Apple pie, dare to say, is even simpler in preparations. It consists of pastry, fresh apples baked with sugar, cinnamon, or other species depending on your imagination. And on the recipe.

Recently, it is almost always accompanied by a scoop of vanilla ice cream. Crisp, on the other side, has an oat as one of the main distinctive ingredients. And contrary to the apple pie has crunchy and crumbly topping.

Is apple crumble and cobbler the same thing as apple crisp?

No, even though they are all baked desserts having the same base, some kind of pastry and the fruit, with a similar preparation process.

However with the variety of different ingredients depending on the recipe itself, giving each of these desserts a special taste and appearance.

Cobblers’ main distinction from other variations is the fact that it does not contain oat. And has a biscuit topping (cake batter or cookie dough), placed on the fruit in small rounds, giving the dessert the look of a cobbled road; that’s where the name comes from too.

The crumble on the other side, with its name originating from England, contains fresh fruit with a streusel-like – topping, baked together with the fruit at once.

Apple crisp or any of its many variations is one of the globally famous and among many favorite desserts.

When deciding which one to make to surprise your kids after school, your partner with dinner, your friends coming over, or just at any other occasion, you can always use your own recipe.

Or family recipe. Or search online among thousands of new recipes created by young and innovative chefs.

Millions of different tastes have resulted in just as many recipes. Even though is it one of the most irresistible desserts, sometimes we need to store it for later use. And hopefully, the advice given here on how to get the best out of your own special apple crisp is helpful.

In any case, the apple crisp is and will remain one of those desserts which remind us of us as children holding our mom’s skirt in the kitchen trying to assist her with preparation. It reminds us of our grandmothers too.

And it will surely lead us to create our own special version which we will leave a legacy to our children and generations to come.